Even if you made all the payments on time, a lender may be able to call the note (demand payment in full) or even declare a student loan to be in default, thanks to an obscure clause in most loan paperwork. 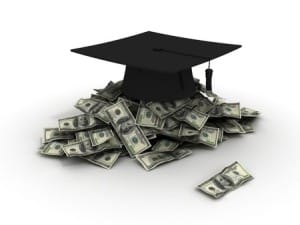 The “auto-default” clause applies if the private student loan had a co-signer, which is nearly always the case because the students themselves have poor credit or no credit. Typically, the co-signer is a parent. If the co-signer dies or declares bankruptcy, the lender may invoke the auto-default clause without any notice to the student.

Federal student loans do not require a co-signer, and major private loan lenders Sallie Mae and Wells Fargo claim that the either do not invoke the auto-default clause or give the borrower an opportunity to clear up the repayment arrangements.

Broadly speaking, and although there are exceptions, all student loans have been nondischargeable since 2005; the theory is that these loans are more like a career investment rather than a loan. That may well have been true twenty or thirty years ago, but average student loan debt has skyrocketed along with tuition costs. Many former students simply do not earn enough to make their payments, as evidenced by the rising tide of student loan defaults.

Some in Congress are trying to change the law. Senator Elizabeth Warren (D-Massachusetts) says she will introduce a bill that allows student loan borrowers to refinance their existing loans at current rates, which may be substantially lower than their existing interest rates.

More action may be forthcoming, as Democrats intend to make the student loan crisis an issue in the upcoming November elections. The next logical step may be allowing a partial discharge in bankruptcy, especially if the borrower has no realistic way of repaying the entire balance due because of an unforeseen hardship.

For a free consultation with attorneys who understand the laws regarding bankruptcy and student-loan debt, contact our office in Melbourne, Florida.