Americans are back to borrowing at a near-record pace. 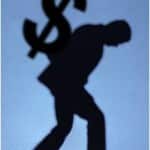 Analysts state that borrowing is increasing across the board, with Americans increasing their credit card balances, taking out more student loans and borrowing more money for houses and cars. Donghoon Lee, a senior research economist at the New York Fed, opined that the increase may represent the end of the de-leveraging cycle that began in the first quarter of 2009.

Consumer debt is a two-edged sword in the American economy. A consumption-based economy depends on consumer spending for steady growth, while in-the-red Americans may have trouble dealing with a sudden and unexpected financial crisis such as a major illness or a job loss. As a result, many families find themselves on the debt treadmill: paying down debt and then borrowing more money, over and over, month after month.

One way to avoid the debt treadmill is not to over-leverage in the first place, but for many families, that austerity is simply not an option in an age of rising prices and almost nonexistent wage growth. For over-leveraged families, especially those families carrying a significant amount of credit card debt, payday loans and other unsecured debt, Chapter 7 bankruptcy may be a viable option. Chapter 7 can eliminate much of your unsecured debt in as little as a few months, and give you and your family the fresh financial start that you deserve.

It may be a very long road back to financial solvency, so it is best to take that first step as soon as possible. For a free consultation with a Central Florida bankruptcy attorney that is committed to helping you find lasting financial solutions, contact our office. After-hours appointments are available.